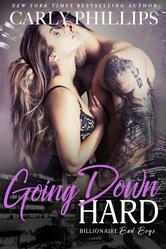 Sweat poured off Derek West’s body as he manually trimmed the hedges alongside the Olympic-sized pool on the grounds of the estate where his father, Thomas, worked as the groundskeeper, his mother the maid. And where he and his family resided in the guesthouse on the edge of the property.

On such a blistering August afternoon, he’d rather be at Jones Beach with his friends, chilling out, drinking, and celebrating the dwindling days before college, but that wasn’t his life. His father needed him and he was here to help.

The Storms family liked their yard elegant and perfect, and Derek’s father was paid to comply. No electric hedge trimmer for him. Which meant as

Derek worked under the broiling-hot sun, he could hear Cassie Storms and her friends at the pool, dishing gossip, as usual.

Cassie was his age, but she and her friends went to private school while Derek attended public. He was around enough to recognize the girls and know them by name. And he was more than interested in Cassie, especially since last night.

He’d been sitting on the porch of the guesthouse, drinking a beer long after his parents and younger sister had gone to sleep. He’d have to hide the bottle from his father, but that didn’t stop him. Cassie had been out by the pool with her friends, until one by one they’d left, leaving her alone. With a little liquid courage in him, Derek had made his way over to where she sat, her shiny brown hair hanging over her shoulders, her brown eyes wide as he’d joined her.

“Hey,” he said, sitting next to her on the lounge chair.

“Hey.” Her brows furrowed in confusion.

For as long as Derek had lived on the property, they’d managed to go their separate ways. He,

taking a smaller driveway out to the main road, Cassie using the main entrance to the big house. But he’d always noticed her, and he’d be a liar if he didn’t admit to jerking off to thoughts of the girl in the mansion many nights as he lay in his tiny room and stared at the glow of lights across the way.

“Want a sip?” He extended his hand, offering her the bottle.

She shook her head. He wasn’t surprised. Cassie Storms was a good girl.

“Chicken?” he asked, goading her.

Her cheeks turned a cute pink. “No.” She paused as if wrestling with herself before coming to a decision. “Fine.” She grabbed the bottle from his hand and took a long drink, then wrinkled her nose.

“It tastes a lot different than wine.”

He held back a snort. Of course the rich girl drank wine.

“But I kind of liked the taste.” She drew her tongue over her lips, soaking up what remained of

he flavor and causing his dick to harden inside his shorts.

He handed her the beer again and she took another sip. They talked about the heat and going away to school and shared the rest of the beer. She wanted to major in business and help run her father’s media company one day.

Derek? He just wanted a degree, a way out of being somebody’s servant, the way his parents were. He was good at computer coding, and he figured he’d start there since it came easily to him. His father had bought him a state-of-the-art computer for Christmas, and Derek knew his dad was still paying off the expensive machine.

“I should go inside,” Cassie said, but she didn’t seem in any hurry to leave.

Instead she turned toward him, her thigh brushing his, their skin touching. Everything about her was soft, from her skin with a light dusting of freckles on her nose to her voice, and he was mesmerized by her. Need rushed through his body, desire for her overwhelming.

He leaned closer until their breaths mingled, malt from the beer and sweetness from her. And though her eyes opened wide, she didn’t pull away. So he closed the distance and kissed her, his lips coming down on hers.

The kiss was sweet, no tongue, but it was the hottest thing Derek had experienced in forever.

“Cassie!” A female voice from the direction of her house yelled out her name.

“Oh!” She jumped back and rose to her feet. Golden flecks sparkled in her brown eyes as she stared back at him. “I have to go.”

“Meet me tomorrow,” he said, not ready for this—whatever this was—to end.

“Late like tonight. Say you left something out by the pool. I’ll be waiting.”

She blinked and nodded. “Okay,” she said in a breathy voice.

“Cassandra! It’s time to come in.”

Her cheeks flamed. “They treat me like a child. I can’t wait to go away to school.”

He knew the feeling of wanting to get away.

She turned to go.

“Tomorrow night,” he reminded her, hating that he might sound desperate.

“Okay.” She nodded, her expression eager, before she swung around and ran to the big house that always seemed so far away to him.

Derek shook his head to clear the memories of last night, knowing the bulge in his shorts couldn’t be ignored. She was hot and his cock got hard just looking at her in her tiny bikini with her tits popping over the edge of the material. And earlier, her tight ass had wriggled his way when they’d risen to dip in the pool. He pressed a hand to the painful bulge in his pants.

At least the hedges and bushes covered him from the chest down. But from his position, he had a perfect view of the girls and was within earshot of their conversation.

“I’m hot,” Trina Davies, a curvy blonde and Cassie’s close friend, whined. “Can’t you get Marie to bring us more iced tea? What are you paying her for anyway?”

Derek clenched his fists as the bitch spoke about his mother. Not even her big tits and curves were enough to make up for her attitude.

“Trina’s right. If Marisol took so long, my mom would fire her ass.” This from Anna Davis, the redhead of the group.

Derek glanced over the top of the bushes in time to see Cassie glance between her two friends. But she didn’t say anything. Didn’t defend his mother.

He’d wanted to like her, had liked her last night. But just the fact that she’d hang out with these girls told him all he needed to know about what was inside the pretty face and hot body. And Derek was less than impressed and really fucking disappointed.

He continued to watch them in silence, unnoticed.

Cassie chewed on her fingernail before finally speaking. “If Marie doesn’t come out in five minutes, I’ll go in and see what’s keeping her.”

God forbid she should pour the drinks and carry them outside herself. Poor little rich girl, he thought

in disgust. What had he been thinking, asking her to meet him tonight?

Cassie pulled her hair off her neck and secured the long strands with a ponytail holder she’d been wearing around her wrist.

Without warning, Derek sneezed, calling attention to himself. He ducked down, hoping they hadn’t noticed him staring.

The giggles that followed told him he’d been busted, and his face flamed hot with embarrassment.

“Did you see that? He’s watching us,” Anna said and not in a whisper.

“He’s so hot,” Trina added. “I’d totally do him,” she said, loud enough to make sure he heard.

Derek wasn’t sure whether to be proud or pissed at the way they spoke about him. As if him listening didn’t mean a thing.

“He’s totally fuckable,” Anna agreed. “But not the guy you bring home to meet your father. Isn’t that right, Cass?”

Derek stiffened. This was her chance to prove she wasn’t like her bitchy friends. She knew he was

“Cass?” Trina pushed her for an answer.

“No, definitely not good enough to bring home to Daddy,” she said, dutifully and as expected.

A sucker punch would have hurt less.

Fuck her. Fuck them all, Derek thought.

He couldn’t wait to get the hell out of here at the end of the summer. Thank God he had the brains to get a scholarship that let him go far away from here. He’d miss his parents, but he was grateful for the chance to start fresh somewhere.

Where he wasn’t the gardener’s kid.