Tiana Malik thrives on being in control and doesn’t do anything that she doesn’t want to. Yet, she finds herself having to give up some of her control to help out her brother. She needs to intervene or her brother’s career as a defensive back for the Miami Thunder will be over. Swallowing her pride she faces the one man that she vowed never to ask for anything. Jameson irks her beyond all reason, but he is her brother’s best friend—her last hope to get through to her stubborn twin. For her brother, she will do anything even face Jameson and ask for his help even if it galls her to do so. The man aggravates her and attracts her all at once. She refuses to give into her baser instincts. She is in control….maybe.

Jameson Williams can’t believe the ice queen is asking him for help. Since he planned to step in to help his best friend any way, he doesn’t mind saying yes. Usually he avoids the tightly wound woman who makes him want to shake her out of her controlled exterior. Although she is aggravating, he can’t help but grudgingly respect her for her unwavering loyalty to her brother. He’ll work with her so they can save her brother’s career before it’s too late. Although she is under his skin he won’t give in…maybe.

They have forced to work together to help a man they both care about. But a passion neither expects awakens….going from a flicker to a sizzle that they are powerless against. Will they dare to give in? 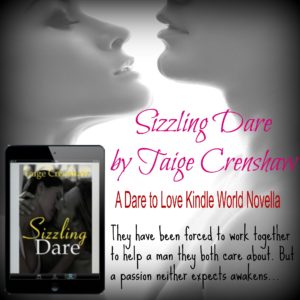 Taige Crenshaw has been enthralled with the written word from time she picked up her first book. It wasn’t long before she started to make up her own tales of romance.

With interracial and multicultural novels set in today, in alternate dimensions, or in the future she writes with adventure, fun sassy heroine’s, and sexy hero’s.

Always hard at work creating new and exciting places Taige can be found curled up with a hot novel with exciting characters when she is not creating her own. Join her in the fun, frolic, interesting people and far reaches of the world in her novels.