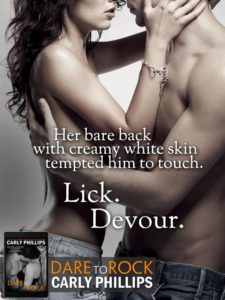 The sky released unexpected swells of water in seconds. By the time Grey and Avery made it beneath the overhang and he led her to the staterooms below, they were drenched.
“Damn. It couldn’t have started as light drops?” he asked.
Avery laughed, the sound not helping the hard-on beneath his jeans.
The room had two beds on either side, both good size for a yacht, and a small dressing area. He opened the closet, grabbed clothes, and tossed two tee shirts onto the bed.
“Pick one,” he said, pointing to his old band tees.
“You have clothes on board?” she asked.
He nodded. “Lola insisted I keep things here for emergencies.” He looked back in and pulled out a pair of shorts for himself.
“She’s a good friend?” Avery asked.
“She is. We met in L.A. not long after I arrived.” He glanced over his shoulder to find Avery had pulled off her wet shirt. Her bare back with creamy white skin tempted him to touch. Lick. Devour.
He grabbed the other shirt and yanked it over his head, then stripped out of his jeans, trying like hell to ignore the fact that she was undressed inches away. He clenched his jaw and pulled on the shorts, which did nothing to hide his erection.
“Can I ask you a question?” she asked.
“Anything.” He spun back to find her seated on one of the beds.
Her damp hair fell over her shoulders, her legs crossed beneath her. But it was his shirt covering her body that had him enthralled. He liked her in his clothing, as caveman as that sounded. He liked thinking of her as his.
“You and Lola.” Avery picked at a thread on the bedspread. “Have you … I mean, did you and Lola ever—”
He paused, then decided he might as well be completely honest. “I never slept with her.”
“But you wanted to? Because she’s gorgeous. I mean, she was voted sexiest woman alive and all. What guy wouldn’t want her?” Avery’s cheeks flamed as she rushed out the words. “Never mind. It’s none of my business.”
“Actually it’s very much your business.” He strode over to her, bracing his hands on either side of her body, forcing her to lie down on the mattress.
The scent of vanilla and rain permeated his senses, nearly knocking him on his ass as desire rushed through him. He wanted nothing more than to toss her on the bed, strip off her clothes, and bury his cock deep in her wet, willing pussy. That wouldn’t happen if she thought he had a thing for Lola. He never had. @ CP Publishing 2015.