It’s a rare, rare author that blows you away on their first book (Worth the Fall), then follows it up with their second (Worth the Risk)!  Meet Claudia Conner! You guys are really going to want to read these books! 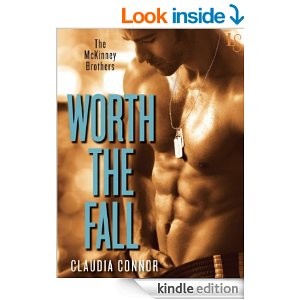 WORTH THE RISK … in Claudia’s words:

My Favorite Restaurant:
Sometimes I picture real places when writing a scene, usually because I had a vision of the scene when I was actually there. In this case, it’s the restaurant Stephen and Hannah go to on their first date. My apologies to the people I was having dinner with. My mind is more often attuned to those who aren’t really there in the flesh. 🙂

Songs:
A single word in a song, sometimes just the emotion in their voice, can set me off on a writing marathon. Many times it’s like the background music of a movie scene. No dialogue, just watching them, feeling whatever they’re feeling. In Worth The Risk, Oats In The Water by Ben Howard played in the background of a particular rough time for Stephen.

Real Events:
It’s rare for any character in my mind to be based on a real live person, in fact this is the first time ever. But the tragedy of Stephen’s fiancé is the true story of a friend’s sister. After hearing the pain of her family’s past, I couldn’t stop thinking of the man left behind. How did you move on from something like that? How did he recover? Did he recover? I don’t personally know the man who was left to put himself back together, but I do know that after almost twenty years he did find love again. 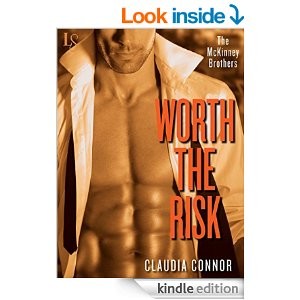 New York Times bestselling author Claudia Connor follows up her heartfelt debut, Worth the Fall, with a novel about Matt’s brother, Stephen—and when a McKinney brother falls in love, powerful emotion and overwhelming desire are never far behind.

Two hearts locked away . . . Hannah Walker spends her days coaching children through injury and trauma, one therapeutic horseback ride at a time. She knows all too well how violence can change a child and leave scars that never heal. It’s easy for her to relate to the kids; what isn’t easy is the thought of facing her own harrowing past.

Millionaire playboy Stephen McKinney could use a little coaching himself. Five years ago he encountered his most horrible nightmare—and the nightmare won. No matter what he achieves, nothing can make up for that awful night . . . or so he believes.

Both desperate for a second chance . . . Stephen is used to getting what he wants. And he wants Hannah. So when she turns him down, he’s intrigued. What he doesn’t know is that her secrets will lead him to a place he never wanted to go again . . . to a side of himself he’s tried to forget . . . a side that would scare Hannah away from ever loving him. Now his only chance to win her trust is to bare his soul, risking everything he tried so hard to protect.

READ ON FOR CHAPTER ONE … and at the end for an eBook Giveaway of both Worth The Fall and Worth The Risk courtesy of Claudia!

Chapter 1
Hannah’s eyes burned and her head ached from the effort not to cry as she pulled into a parking spot at Foodland. At eight o’clock that morning she’d walked into the veterinarian’s office a dog owner. Three hours later she’d walked out . . . not.
She cut the engine, her forehead dropped to the steering wheel. She’d known Max wasn’t himself, that he might be sick, that eleven was old for a dog, especially a large shepherd mix. But she hadn’t expected to hear the words nothing we can do, or best thing for him.
Biting her lip against tears, she forced herself out and into a spring day so bright and beautiful she couldn’t decide if it was cheerful or a slap in the face.
She grabbed a cart and mentally planned her route hitting produce first. Avocados, jalapeños, tomatoes. She searched her fuzzy brain for what else she needed for guacamole, her standard contribution when she went to her brother’s. Exactly where she did not want to go tonight. She didn’t want to watch the brothers who’d raised her tiptoeing around, giving each other worried looks, thinking they needed to fix it like they always did. They couldn’t fix this. A lot of things couldn’t be fixed.
Finished with that, she silently repeated the rest. Chips, bread, beer. Chips, bread, milk, beer. She added things and ticked them off as she went. But old habits were hard to break, and like a car on autopilot, she found herself in the dog food aisle.
All she saw were Max’s big eyes fixed on hers. Trusting her when she said it would be okay, not understanding the vet’s syringe was filled with enough anesthesia he’d never wake up. The lump in her throat swelled until she couldn’t swallow past it. Her nose burned and the bags in front of her blurred.
Just get the beer and go. She wheeled around and turned the corner of the next aisle.
She couldn’t handle a pity party tonight. Of course if she didn’t go, if she said she just wanted to hang out at home, they’d cancel the whole March Madness deal and insist on coming to her house. Her house, where a certain brown-eyed shepherd wouldn’t be waiting. An enormous weight settled on her chest.
Don’t cry. She scanned the beer case and swiped at her eyes. She wasn’t going to cry. She bit down on her bottom lip.
Damn it. She was. No wonder her brothers treated her like glass. Broken glass.
“Bad day?”
Hannah jerked at the deep voice beside her. Right beside her and way too close. Dark, tall and wide, the man filled out his expensive-looking black suit like an athlete entering the stadium tunnel before a game.
“I’m fine.”
He angled his head, smiled, and her heart actually stumbled. “You know, people usually cry in their beer after they drink it. Just saying.”
He continued to study her with soft brown eyes, and for the first time in a long time, she didn’t want to look away. But she did. And pulled the sides of the long-sleeved shirt she wore open over a tank top closer together. Because of the frigid air coming from the beer case, and because no matter what she had on, no matter how covered, she could never shake the feeling people could somehow see through to what lay beneath. “Well, I’m done now.”
He looked back to the case as well, but even from the side she could see a smirk pulling at his lips. “That’s good.”
She grabbed a six-pack of AmberBock, spun her buggy around, and headed to the front, feeling the stranger’s eyes burning her back the entire way.

BUY WORTH THE RISK (Stephen book 2)

BUY WORTH THE FALL (Matt book 1)

COMMENT FOR A CHANCE TO WIN an eCopy of WORTH THE FALL & WORTH THE RISK – 2 winners. Claudia will send one book to each. Check back Sunday for winners. (Personally I wouldn’t wait to win, buy & start reading at least one of them, they’re that good!)