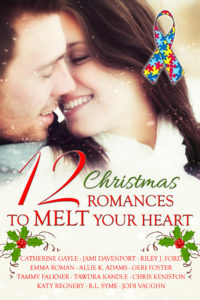 Count down your Christmas holiday with a fantastic assortment of holiday romances written especially for this set. Humor, drama, suspense, and military heroes abound. Fall in love with new characters from a series you’ve never read and learn more about characters from your favorite author’s series you’ve been dying to hear about.

Each book is EXCLUSIVE to the anthology and NEVER BEFORE PUBLISHED. Help us support a cause near and dear to each author in the set and to so many we love.

Christmas turns to chaos when all the McKoys get together for the holidays. It takes a 12-yr-old autistic boy and his faithful companion to teach them all the true meaning of TREXmas.

Drawn together by tragedy and broken apart by practicality, can two lost souls find each other again during a magical holiday season?

Selma and Shaun decide to celebrate their anniversary with a Christmas ski vacation. When he reveals a huge secret he’s been hiding, she is crushed by an avalanche of emotions. She questions whether they’re meant to be together…until a real avalanche hits.

The five Avery Sisters create a little Holiday Mischief and find romance in the process.

You might remember them. They have two children named Reagan and Lincoln. Find out how their love story started in Yes, You. One bad boy, one good girl. The question – Who? Me? Yes. You.

He says everyone deserves a second chance. She thinks it’s high time for him to turn that idea around on himself.

~ Tawdra Kandle​ ~ Underneath My Christmas Tree ~

When two hearts ignite, the most unexpected gifts can turn up under the tree.

Annette Deluca believes you only get one chance at the love of a lifetime. It’s up to Michael Becker and his young autistic son to prove her wrong.

Long before the English brothers met their wives and girlfriends, their father, Tom, captured the heart of their mother, Eleanora. Travel back in time to Christmas 1981 and find out how it all began!

Kidnapped from her front yard by Santa, a woman who hates Christmas finds unexpected joy in a holiday she swore to ignore for the rest of her life.

Sadie never expected a handsome firefighter to crash into her living room on Christmas Eve, but when her tree catches on fire, he could save more than her life…

A blizzard, a lost cat, and a little bit of Christmas destiny gives Eliza a chance with the man she’s loved from afar for too long.