A Scandalous Dare by AC James 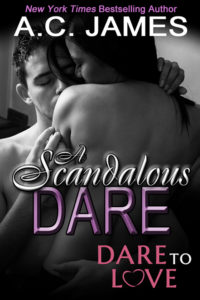 Sawyer can’t deny his desire to the stunning and seductive Harper Ridgeway. His future with her means confronting a scandal that puts his career as a football player with the Miami Thunder in danger.
Harper Ridgeway must represent him in a defamation case caused by a conniving woman claiming to be his ex-girlfriend.
Will Harper trust that the client she’s representing is telling the truth and give into her growing attraction? Or will this con artist ruin both his skyrocketing career and budding relationship?
Passion ignites in this contemporary workplace romance which is part of Carly Phillips Dare to Love Series on Kindle Worlds. 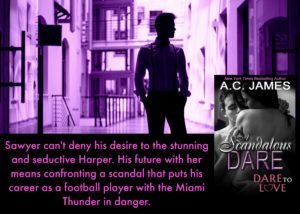 New York Times and USA Today bestselling author A.C. James writes paranormal romance and erotica, including Eternal Ever After which was featured in the bestselling Spice Box anthology. She pounds out sexy scenes at her keyboard where romance is laced with horror in hot stories of vampires and bad boy werewolves. Her stories feature strong heroines and alpha heroes, with plenty of action, twists, and turns that will keep you turning pages.

A.C. resides in northeast Pennsylvania where she entertains her husband with her imaginative yarns and quirky sense of humor. She spends her time drinking large vats of coffee while taming two toddlers by day and writing by night. Recovering video game beta tester and tech geek who grew-up going to cons and watching SmackDown. There’s probably some cosplay pictures around somewhere of her dressed up as Bloodberry from Saber Marionette J. Just don’t tell anyone.

2 thoughts on “A Scandalous Dare by A.C. James”