BLOG – Warning, Long Post ahead … but keep reading for the first ever teaser for DARE TO SURRENDER! July 15, 2013.

For years, I was scheduled with books that I owed to a publisher and had no time to think about what, if anything, OTHER I’d like to write.  Interviewers and Bloggers would ask, what would you like to write that you haven’t already and I always said, I’m writing what I love.  And this was true.  100 % true.  Then, in the summer of 2012, my dad was dying.  We knew it, the doctors told us, and we were just waiting.  The last thing I could focus on was something I owed, something I had to do.  But being a writer, I still needed the escape.  That was part 1.

Which leads me back to the book of my heart.  During that difficult summer, I opened up a blank page and started writing.  No plotting ahead, no prethinking, just writing.  Before I knew it, I had 100 pages of a “new and different” Carly Phillips book.  I did run it by a publisher, but it wasn’t what they wanted from ME.  And because I’d gotten behind on what I did owe during the time my dad was sick, I put the story away in a file labeled “Secret Project.”

Fast forward to a month or so ago when I was asked to be part of the INVITATION TO EDEN series with authors I’d been reading during this time and really really loved.  And you all know, I’ve always talked about what books I’m reading on my Facebook Fan page, and tried to steer you all towards those authors too.  Well, I had a thought – what if I took my secret project — made the hero a Dare Cousin – and finish this book of my heart and make it part of the DARE TO LOVE series … as well as the INVITATION TO EDEN series?

This weekend, I reread and reworked those 100 pages of what is now called DARE TO SURRENDER and I am weepy when I say, it’s as awesome working on it as I remembered.  I hope hope hope you all love it as much as I do once it’s released in July.  But the truth is, I am in love. 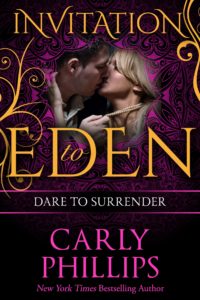 I was arrested a mile outside of Manhattan.  Grand theft auto, the cop said.  Bullshit, I replied.  The baby Benz belonged to me.

Still, he cuffed me and hauled me to the nearest police station.  He said his name was Officer Dare and he was a dark haired man, tall, taller than Lance, who prided himself on his height, and broader from what I could tell beneath his uniform.  His intense expression never wavered.  All seriousness, all the time, but I sensed he’d be handsome if he smiled.  So far, he hadn’t.

Once inside the typical looking police station – not that I’d seen the inside of one before – but what I’d thought one would look like from Law and Order – he sat me beside his wooden desk, and cuffed me to the desk!

I ought to be scared but some stupid part of me had already decided this new part of my life was some grand adventure.  At least it was until Officer Dare asked me to empty my pockets and divested me of my last $500 dollars, cash I’d taken from the extra stash I kept in my nightstand.

He thumbed through the bulging stack of twenties in never ending silence.

The money represented my lifeline.  “I’ll need to eat when I get out of here,” I told my jailer.

“All of it?” I asked, as if I seriously believed a member of the police force would take a down on their luck woman’s chance at food.

For some inane reason, I burst out laughing.  I’d gone from living in denial to homeless and arrested in a ridiculously short time.  This whole turn in my life really was absurd.

I rubbed my free hand up and down over one arm.  “Don’t I get one phone call?”

He nodded and reached for the telephone on the desk.

I frowned, suddenly realizing I had no one to call.  Lance was out of the question and our friends were really his friends.  As for my parents, they didn’t remember my birthday, so something told me a late night call to pick up their daughter from jail would not be their number one priority.

The officer stared at me, confused.  “Now you don’t want to use the phone?”

“No thank you.”  Because I was totally, utterly alone.

Nausea rose like bile in my throat and I dug my nails into my palms.  When I forced myself to breath deeply, the familiar burning in my chest returned and I realized I’d walked away without the one thing I never left home without and it wasn’t my license.

“Any chance you’ve got some Tums?” I asked.

He ground his teeth together and I swear I heard his molars scraping.  “Okay, yeah.  I’ll get right on that,” he muttered and strode off.

“I’ll just wait here,” I called back.  I lifted my arm the short distance the cuffs would allow and groaned.

What felt like an endless stretch of time passed during which I reviewed my options, of which, once again, I had none.

Now what, I wondered, utter and complete despair threatening for the first time.  Eventually I swallowed back the lump in my throat and forced myself to make the best of the situation.

I kicked my feet against the linoleum floor.  Leaned back in the chair and studied the cracked ceiling.  Hummed along to the tune crackling on the radio in the background.  And yeah, I tried not to cry.

“You know, I thought it would take me longer to get you in cuffs.”  A familiar masculine voice that oozed pure sin sounded beside me.  @CP Publishing 2014, on sale July 15, 2014

All other outlets, book available on release date!

After ending a relationship to a cheating, domineering man, Isabelle Masters takes off in her leased Mercedes, only to be arrested for grand theft and hauled to a local police station. To her surprise, she is rescued by the most unlikely person possible, Gabriel Dare, a man she’s been attracted to for far too long. Gabe offers Isabelle freedom along with an invitation to Eden, an exclusive island resort where everything and anything is possible.

Although Gabe yearns to possess Isabelle, he knows all too well he must fight his primitive need to bind her to him, and instead help bring out the independent woman she yearns to become – or risk losing her for good.