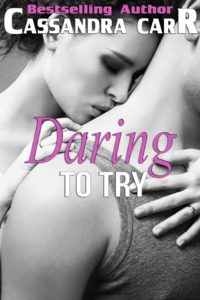 Wide receiver Taylor Wilkinson’s worst nightmare has come true. As a member of the Miami Thunder professional football team, Taylor has always prided himself on staying in shape and playing smart. What he didn’t count on was a three hundred twenty pound defensive lineman tackling him and using his body to cushion his own fall to the turf. Over the roar of the crowd on Thanksgiving Day, Taylor heard the pop in his shoulder and knew things would never be the same.

Fresh out of surgery to repair the double break in his collarbone, his season is over. After ten years in the league, Taylor fears his career might be too – not many players last into their thirties in professional football. Pinning his hopes on Sherryl Stoddard, the best sports psychologist in Miami, he’s ready to do whatever it takes to get over his fears and back onto the field. Now, if only he could stop thinking about Sherryl’s curves… 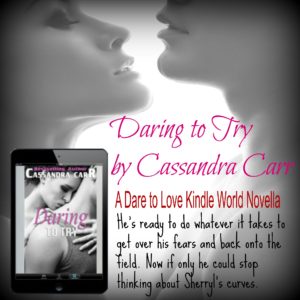 She thinks the best part of being a writer is penning stories in her made-up worlds while most others struggle with commutes, micro-managing bosses and cranky co-workers.

2 thoughts on “Daring to Try by Cassandra Carr”