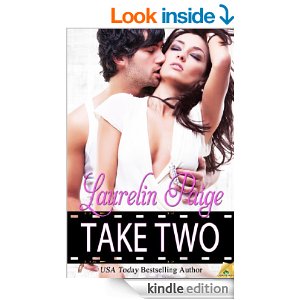 A HUGE CONGRATULATIONS FOR HITTING # 1 ON AMAZON TO MY GUEST TODAY! Last week I was invited to attend a Facebook Party for Lauren Blakely and Laurelin Paige.  I had a blast and today I’m so excited to host Laurelin here today … and give away 5 … yes 5 copies of her new release,

He’s ready for his close up, but she’s the one calling the shots.

On the night of her graduation from film school, straight-laced Maddie Bauers fell completely out of character for an oh-my-god make-out session with a perfect stranger. Complete with the big O.

Seven years later, that romantic interlude is still fresh in her mind. That stranger is now a rich and famous actor. And she’s one very distracted camera assistant working on his latest production. She might consider another tryst…if he even remembers her.

Micah Preston does indeed remember Maddie. Too bad he’s sworn off Hollywood relationships. He allows himself as much sex as he likes—and oh, he does like—but anything more is asking for trouble. For the woman, not for him. Yet knowing Maddie could want more than a movie-set fling doesn’t stop him from pursuing her like a moth drawn to hot stage lights.

But as the shoot nears its end, it’s decision time. Is it time to call, “Cut!” on their affair, or is there enough material for a sequel?

For a chance to win one of 5 copies of  TAKE TWO, comment here!

Note – this contest is also running on FB – same 5 copies given away at both sites, winners will be randomly chosen from each.